On 10th May, 2020, in order to promote public awareness of mathematics, the Chinese Mathematical Society, in conjunction with the Chinese Society for Industrial and Applied Mathematics, and the Operations Research Society of China, invited Gang TIAN, who is the President of Chinese Mathematical Society, to present an online public talk ``Inside and Outside Mathematics’’. The live broadcast platforms, such as CCTV and the Intellectuals, carried out a simultaneous live broadcast of the talk. There were 26,000 audiences participated in the talk.

The slices of “Inside and Outside Mathematics”: 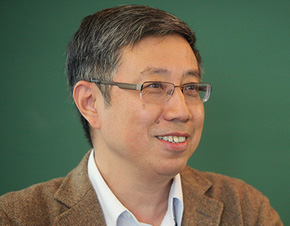 Gang TIAN, President of the Chinese Mathematical Society, Vice President of China Democratic League, Academician of the Chinese Academy of Sciences, Academician of the American Academy of Arts and Sciences, Chair Professor of Peking University, Director of the Beijing International Mathematical Research Center, Executive Committee Member of the International Mathematical Union. He has awarded the Alan Waterman Prize of the National Science Foundation of the United States and the Oswald Veblen Prize of the American Mathematical Society, and was invited to be a sectional speaker (1990) and a plenary speaker (2002) at the International Congress of Mathematicians. He has made outstanding contributions in the fields of complex geometry, geometric analysis and mathematical physics, including: In the Kahler-Einstein metric research, the concept of K-stability is introduced and the equivalence relationship between the existence of this metric and K-stability is proved. In cooperation with others, a strict mathematical foundation of quantum cohomology theory and GW-invariant was established. In the study of high-dimensional gauge fields, a deep connection between self-dual connection and scale geometry is established. Cooperating with others, he proposed an analytical minimal model program and made important progress.